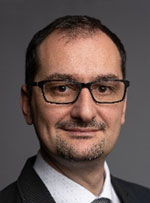 After training as a mechanical engineer, Johannes gained his first professional experience as a project manager in plant construction for environmental technology. He switched to sales after a few years and moved from plant construction to the railway industry. He has been working for Linsinger Maschinenbau as International Senior Sales Manager since 2014, where he looks after selected markets in Central and Eastern Europe as well as markets in Asia.

Environmental protection has been close to his heart since his early youth. At Linsinger Maschinenbau, he can complement this purpose in a practical way with the sale of rail milling trains: Mobile rail milling not only extends the service life of the rails and thus saves resources but is also almost emission-free in its application: with the development of the first hydrogen-powered rail milling train, this will be 100% successful in the future.