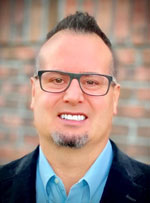 Biography: Daniel Hampton is the Manager of Contract Services for CSX Transportation in Jacksonville, FL, responsible for the contract programs of rail grinding, shoulder ballast cleaning, and ditching.

Daniel started on CSX in 2003 as a manager in Maintenance of Way in Fort Lauderdale, FL, working on the double track construction project between West Palm Beach and Miami, FL. He then worked four years in Design and Construction as a Project Engineer in Cincinnati, OH, managing over $32M of projects that included drainage, tunnels, bridges, roadbed stabilization, siding additions, line speed increases, flat yard, and hump yard projects. In 2010, he moved to Jacksonville, FL, to work in the cross-functional Process Excellence department as an Industrial Engineer and then as a Lean Six Sigma Black Belt supporting the Engineering department. In 2014, he received the Chairman’s Award of Excellence for work as an Enterprise Asset Management Project Manager, before beginning his current job in 2015.

Dan has a BS in Systems Engineering from the United States Military Academy at West Point. He is also a graduate of the Army Field Artillery School, the Army Ranger School, and is a current member of Subcommittee 9 in Committee 4 – Rail.