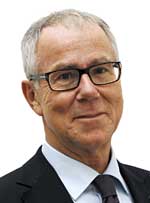 Biography: Rudolf Schilder is a consulting engineer for his company, ARTS (Advanced Rail Track Solutions). He began his railway career at the Austrian Federal Railways (OBB), where he was in charge of track design. Subsequent to that, he held several positions, including head of superstructure, head of track, and later head of infrastructure maintenance. During this period, he merged the technical needs with economical aspects of the life-cycle cost model developed by Prof. Peter Veit. From this, new techniques were introduced to improve track quality, which led to significant cost reductions. Rudolf also was involved in structural organization changes; he acted as managing director in subsidiaries for turnout maintenance and a consulting company, and served as a member of the advisory board.

After his retirement from OBB, he launched his own company ARTS (Advanced Rail Track Solutions), which provides track and systems engineering services for all types of railways.

Mr. Schilder is a graduated civil engineer with a doctorate in technical sciences from the Railway Institute at the technical University Graz.

He is member of VDEI, AREMA, UIC, CEN.