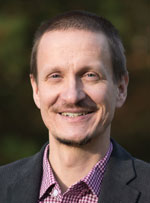 Biography: Richard Stock was born in Leoben/Austria. He is holding a masters and phd degree in material sciences from the University of Leoben / Austria.

Richard worked for 12 years at voestalpine in Austria in the R&D department and in technical customer service. He was responsible for wear and RCF issues of rails and he was project manager for a number of national and international university collaborations. He also participated in the European Union project Innotrack dealing there with simulation of wheel rail contact, the influence of rail grade on wear and RCF and rail maintenance.

Between March 2010 and November 2010 Richard was seconded to KELSAN Technologies (now LB Foster Rail Technologies) in Vancouver based on the research collaboration between LB Foster and voestalpine Schienen GmbH.

In September 2013 Richard joined LB Foster Rail Technologies in Burnaby / Canada in the position of Rail Technology Manager. In this position he was responsible for various R&D processes and projects, for managing university collaborations and for high level technical customer interaction. Besides this R&D function Richard was also leading the Application Engineering group that provides support for conducting and analysing field trials.

Since April 2017 Richard is working for LINMAG Rail Milling Services and LINSINGER Austria as Milling Technology Manager. In this function, he is responsible for promoting LINSINGER milling technology in North America and to provide support with respect to rail-wheel contact related problems.

Richard Stock is married and has three children (boys).